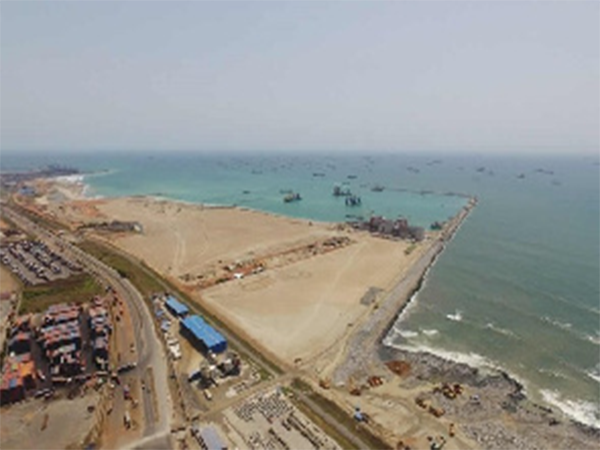 First phase of Tema port expansion project to be operational in June.

The first phase of the Tema port expansion project by Meridian Ports Services is expected to be operational by end of June this year.

So far about 80 per cent of work has been done on the initial phase.

According to the Chief Executive Officer of Meridian Ports Services, Mohamed Samara, when completed, the Tema port will be the biggest in the Sub-Saharan region.

He said, “This project is huge and it will double the capacity of the port, it means more jobs, less cost, and efficiency. Initially, 300 euros was charged per ship in the anchoring due to congestion and that resulted in ships leaving for neighbouring countries.”

Mr Samara said, “Currently, we berthing window arrangement more ships are arriving daily and even on weekends and this has reduced sea freight to a thousand dollars per ship, multiply that by five hundred thousand ships that come into the country, that is about $5 million for the Ghanaian economy.”

Started in 2007, the Tema port expansion project is a joint venture between the Ghana Ports and Harbour Authority (GPHA) and the meridian ports holding.

The project is in line with the country’s vision of eliminating inefficiencies at the Tema port in order to boost growth and revenue.

After years of planning, 90 hectors of land has been reclaimed from the sea to give birth to the new Tema port.

So far, the project has reached its major milestone with the first part of the first phase expected to go live on June 28 this year after which the second part will be operational by March 2020.

Twelve megawatts power station has also been commissioned while 350 meters of breakwater has been built.

“By June this year, we will be more than halfway through in terms of overall work done. In terms of functionality and deliverables, we are about 76 to 80 per cent complete. Again, we will deliver 7 more cranes and should functional by the 8th of June,” Mr Samara said.

The project has provided employment for both Ghanaian companies and individuals.

Currently, the project engages close to 60 local contractors and suppliers in areas such as trucking, outsourcing.

Over 1,000 Ghanaians have also been employ on the terminal to provide direct services and outsourced activities with an additional 3,000 Ghanaian workers mobilized as contractors.

Other benefits from the project include the upgrading of the Tema community 3 beach road at a cost of 9 million dollars which is expected to be completed by June 2019.

Construction works on the Motorway Roundabout at the cost of $7 million has been completed.

According to Mr Samara, about $1.5 billion is being invested in the project.

“The core function of this project is to double the capacity of the port. We have not only done that but have created lots of jobs for Ghanaian companies and individuals. Over 1,000 to 1,200 Ghanaians have been employ on the terminal to provide direct services and outsourced activities. An additional 3,000 Ghanaian workers have also mobilized as contractors so this is huge for the economy,” Mohamed Samara stated.

He added that the project when completed by 2020, will give Ghana a competitive edge over other economies in the sub-region.